Hmm, this isn’t really working, is it? Pictures are worth a thousand words, though, right? 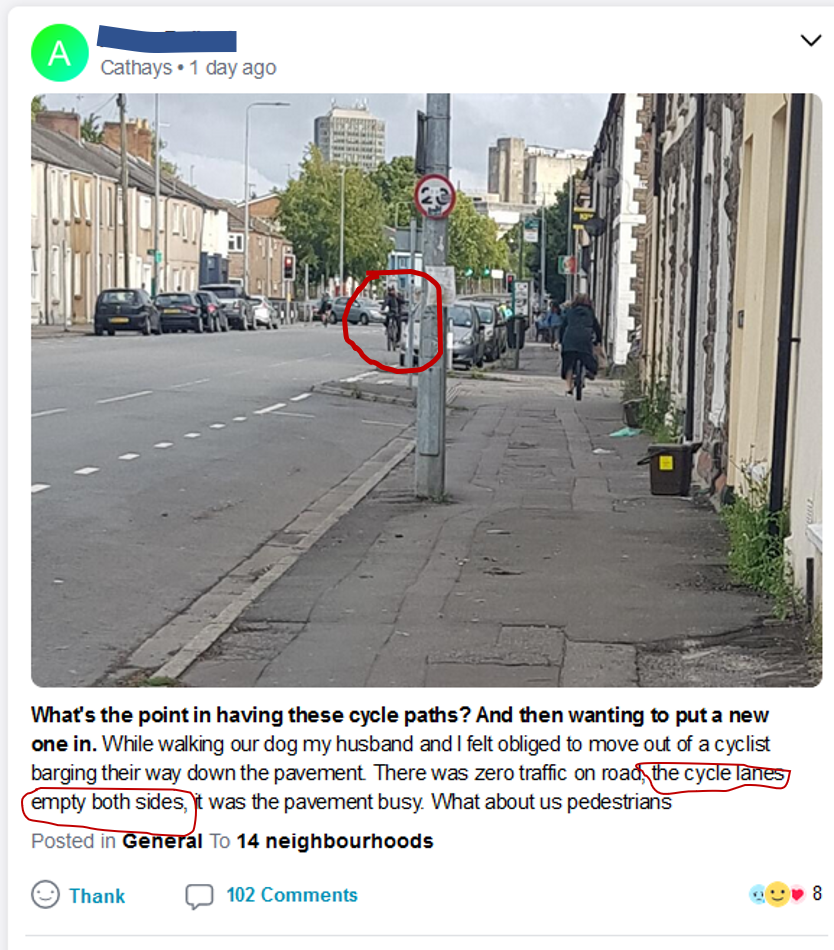 A screencap there of a post made on Nextdoor.co.uk (a website about which it’s likely that those who’ve encountered it have, erm… opinions), which shows Cathays Terrace in Cathays, Cardiff – where Cardiff Council is planning to put a new kerbed cycle lane [PDF], to which the poster alludes below their photo (‘wanting to put a new one in’).

What’s particularly interesting about it is, as you’ve probably noticed, the poster was very keen to point out that they had encountered a cyclist ‘barging’ their way down the pavement, which obviously struck them (and their husband) as deeply annoying, given that ‘the cycle lanes [were] empty both sides’.

Except, as you’ve probably also noticed, the cycle lanes were not empty on both sides. In fact, the poster’s own photo shows a cyclist using one (the poster was not pleased when I pointed this out downthread).

A great example of confirmation bias, which of course plagues us all. Having been out on an invigorating ride around my bit of Cardiff, I have to give myself a slap sometimes so that I don’t forget all the drivers who gave me plenty of room while overtaking me, and only remember the prick who drove so close to me I could have climbed into his passenger seat.

The power of confirmation bias is particularly intense, however, when it’s combined with another psychological phenomenon, that of out-grouping. And its particularly pernicious when both these phenomena are combined with an actual substantive difference in power between two groups. At this point, I am beginning to open up multiple cans of worms, and to hopefully force the squirmy buggers back, let’s just say that hatred of cyclists and the power differential between anyone who gets behind the wheel of any motor vehicle and everyone else are going to be the subject of future posts.

For now, let’s just focus on the ways in which, as the photo above shows, members of a group to which an observer doesn’t belong can, in some circumstances, literally become invisible to them, so long as they’re behaving in ways which don’t fit the observers preconceived ideas about how that group behaves.

Perception, as I pointed out in this post, is theory-laden.

Which is why, of course, so many people apparently seem to think that all cyclists run red lights pretty much all the time. And also most likely why the OP in that Nextdoor thread claimed downthread that they never saw cyclists using the cycle lanes on Cathays Terrace (a major commuter route, which in non-COVID times I would commute along twice a day alongside loads of others, taking my life in my hands – another post for another day there) and constantly encountered cyclists riding dangerously on the pavement.

Distorted perceptions, of course, have real, direct consequences. In my previous post I pointed out how gaps in driver training prevent drivers from looking out for vulnerable road users and thus lead to injuries and deaths. Less dramatically, but still very importantly, the simultaneous visibility and invisibility of cyclists leads to very real consequences. The thread under that photo was full of them: people sticking their two pen’orth in on how irresponsible and dangerous cyclists were, how they couldn’t believe that so much money was being wasted on them, and so forth. Which then leads to angry responses to consultations around new cycle lanes of the kind soon (thankfully) to be built on Cathays Terrace.

And ultimately, to views like those of Julia Burch from Bexleheath, committed to posterity on the 29th of June 2001, which are all too commonplace.

This site uses Akismet to reduce spam. Learn how your comment data is processed.